On 16 December 1941, Japanese forces landed at Brighton beach in Miri and scaled up Tanjong Lobang to reach the lighthouse where they killed the caretaker. The Japanese forces rapidly moved towards Kuching and  occupied it on Christmas Eve that year.

When the Japanese invaded Sarawak, Vyner Brooke had already left for Australia where he operated in exile from Sydney, and subsequently moved to London. Most of the European officers in Sarawak were rounded up by the Japanese and interned at Lintang Camp (the present Batu Lintang Teachers’ Training College) in Kuching.

They were confined to trying conditions and many did not survive the ordeal. The administrative and economic infrastructures were severely damaged during the three-and-a-half year occupation. The Japanese forces built an iron bridge (which can still be seen today) across the Sadong River in Serian. The civilians also suffered much hardship as much of their rice crops were seized by the soldiers from The Rising Sun. 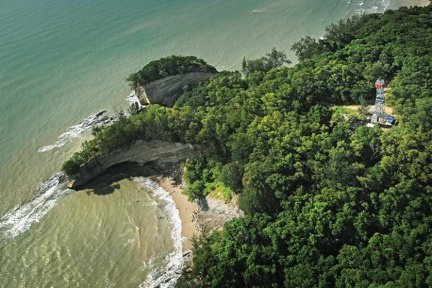